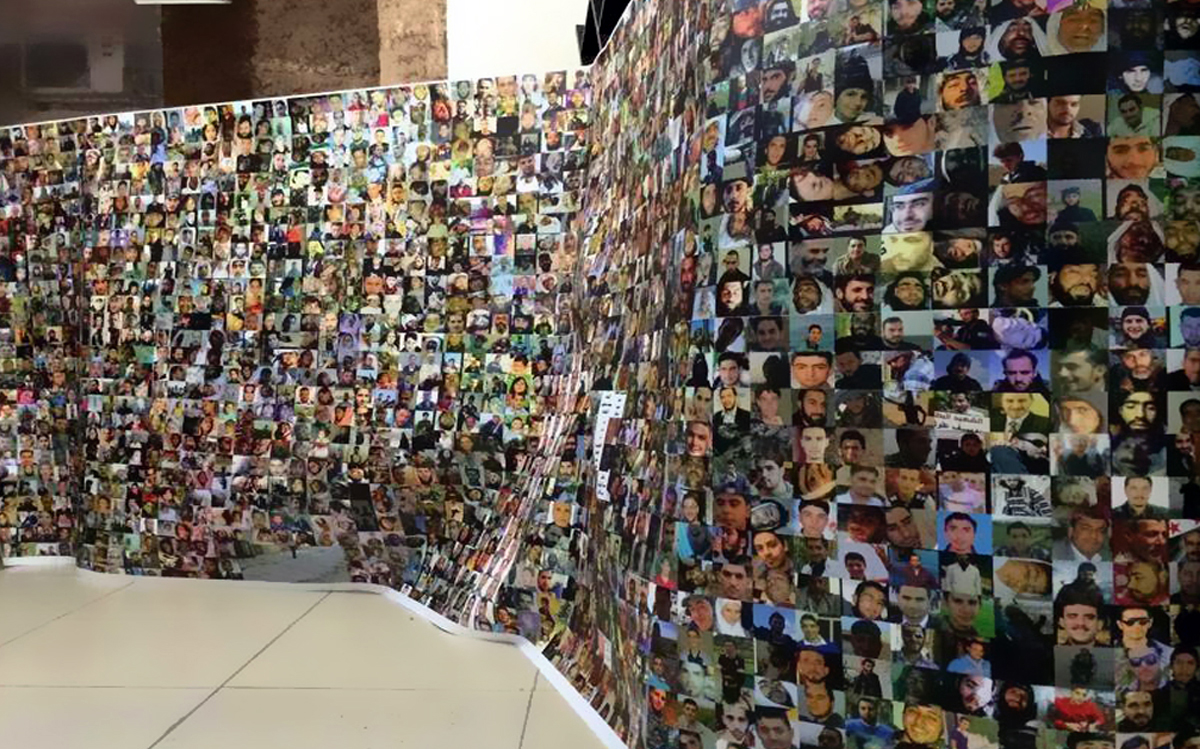 The photographer Tamer Alturkmani has made a panel that includes a large number of Syria’s martyrs to “draw the attention of the Syrian expatriates and remind them of the martyrs who sacrificed their lives for them to live”. It was also meant to “maintain the martyr as a witness of the fidelity of those who rose up and revolted for him”.

Tamer, aged 24 years old, who comes from the city of Homs, began with collecting the martyrs’ pictures on 6th, June, 2014 due to “the intensification of massacres and the rising of the regime’s escalation” according to Tamer. The number reached 50 thousand images on the 9th of July last year, and thereafter tamer worked on coordinating the largest “photographic” panel whose length goes up to 170 meters.

Tamer explained to Enab Baladi that the biggest support this project has received was from people who responded to the idea and sent pictures of their relatives’ martyrs or those whom they know. Then, he alone finalized the technical process of scrutinizing, arranging pictures on the poster, and then printing them. Tamer believes that the work will draw attention of people, bodies and organizations concerned with human rights. It will also show the “brutality” of Assad’s regime against the Syrian people.

When asked about whether or not the project will annex a larger number of martyrs, Tamer stated that he would stop at the number of 50 thousand martyrs. Yet, the Syrian network of human rights to which Tamer belongs, will work on a wider project that includes 130 thousand martyrs, in which for each martyr an identity card with full information about the martyr and his date of martyrdom will be issued.

Tamer is a field photographer who fled from Syria to Jordan after he got a head injury for the second time while covering clashes of the free army’s brigades in Daraa. His first injury occurred at the beginning of the revolution in Homs, the place of his origin.

As for the fame Tamer obtained by running this project, he said, “I never thought and will never think this way, I started this project sincerely, and never sought for fame or money”. He added, “The echo this project has made will be a trigger for me to do similar projects related to the Syrian issue. I’m doing this for the sake of my country at the end of the day”.

The Syrian network of human rights had identified last Thursday, 21st of August to be a historic Syrian day that marks the first anniversary of the chemical massacre. The network had planned to organize a silent protest in front of Syria’s embassy in Amman to lift this panel, for which Tamer and his colleagues started to prepare. Yet, a couple of hours prior to the event, the network apologized and cancelled the event because “Jordanian authorities prevented the network from preceding with the event despite having obtained approval in advance”. However, Tamer stated that they will never stand helpless about this panel in front of the orders of Jordan authorities or others, but there will be another chance for it to be displayed.