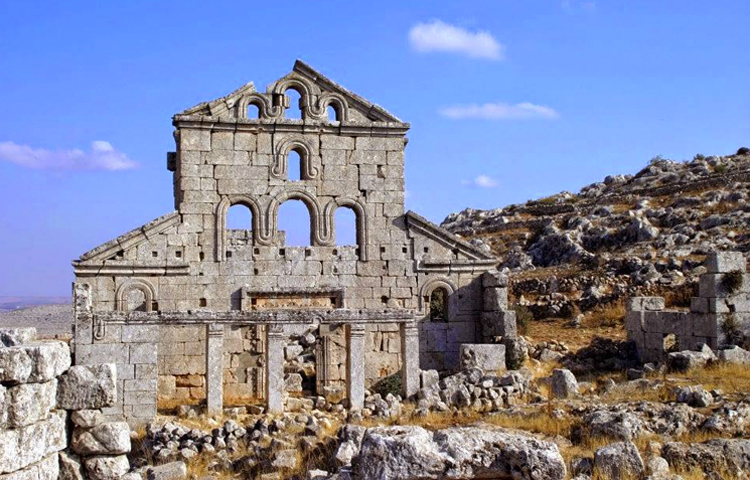 Continuing a previous report published by Enab Baladi in the issue #119 on the deliberate destruction of the historical heritage in Syria by regime’s aerial bombardment   or due to the clashes or by systematic excavations and smuggling. That report focused on Aleppo and Der Ezzor; in this report we will shed light on the monuments destroyed or smuggled out of Idlib and Daraa, as well as the monuments blown up by ISIS in northern Syria.

The city of Daraa (Southern Syria), one of the first cities to revolt against the regime, has been subjected to barbaric bombing by Al Assad troops which led to the destruction of its monuments, many of  which belongs to the Bronze Age.

The activist Rami Al-Husain from the city of Daraa said: Many monuments were severely bombed such as Al-Omari Mosque, which was built during the reign of Caliph Omar Ibn Al-Khattab, and it was destroyed completely by the troops of the regime. The falling of its minaret was published on YouTube. The old cities in Bosra Al-Sham and Tal Al-Ashaary have been destroyed due to the bombing, in addition to leveling the Roman city in Nawaa.

Al-Husain continues: “Until now, there are no blueprints of the ancient cities in Horan in a safe place, because those blueprints are still in the directorate of artifacts and museums and no one knows whether they are in a safe place or they were destroyed, because the area in which the directorate is located is still controlled by the regime. Some people are interested in preserving the artifacts and the deep historical roots of the area throughout the ages; however, they are a few and they cannot do much about it”.

Plenty of artifacts are still being discovered in Daraa and are put in the museum. At the beginning of the war, the regime transferred them to an unknown place. The remaining buried artifacts were left and became everyone’s focus. Some artifacts were discovered in the western and southern areas of Daraa near the village of Nassib on the Jordanian borders, by the end of the Hijjazy railroad. They were sold and most of them were smuggled to Israel, according to a well-informed activist who insisted on anonymity. The activits added that the area lacks control and the power of arms rules. Antique brokers have their experts, excavators, merchants and smugglers even before the recent events in Syria. None of the artifacts were ever retrieved after being excavated and smuggled out of the country.

Several sites in the governorate of Idlib, northwest of Syria, are classified as World Heritage Sites; one of well-known sites is Shinshirah in Zawiya Mountain and Barisha area. Shinshirah is one of the five historical locations in the governorate stretch across about 40 villages that go back to the Roman and Byzantine Eras and were built between the first and seventh century AC; these sites are classified by the UNESCO as World Heritage Sites, and has been listed as Endangered Artifacts.

Shinshirah historical site consists of five churches, several palaces, a hundred ancient houses, and eight other ancient villages along the road between the town of Al-Barra and the city of Kafranbel. These villages have been targeted with regime shelling and thus became partially destroyed.

Most of the people living in the southern countryside of Idlib had to take refuge in the historical sites. The area of Shinshirah received about 100 families who had to flee from different areas of Idlib’s southern countryside because of the war. According to a report in Almantara Newspaper, a local newspaper issued in Kafranbel, receiving waves of displaced families lead to the destruction of the site. The report said that the families are cutting large stones -which were originally used in building the historical houses in the area- in order to sell them, or to use them in building shelters near the ancient historical palaces.

An activist in Idlib, who preferred anonymity, said that the residents of the city are conducting unorganized individual excavations; when they find an artifact, it is sent to Turkey immediately where it is sold to the highest bidder. In other places like Al-Barra village, members of the so-called Local Security Committee of the local council, excavate and smuggle their findings out of the country. The activist pointed out the lack of accountability in the area, and that these practices are happening under the threat of force and weapons.

The employees of the directorate are trying to raise the public awareness among the displaced people in an effort to put a stop to the arbitrary excavations and to prevent further destruction of the monuments and the historical sites; however, these efforts have been so far futile.

The absence of the rule of law and the absence of alternatives, the displaced people had to escape their villages and take refuge in the historical sites despite the lack of the basic necessities of life and the spread of the poisonous insects there. It was their only solution especially as the opposition failed to set up enough camps for the refugees and to secure their needs, added the activist.

Similarly,  the ISIS destroyed a number of monuments and historical mosques in Raqqa and the countryside of Hasaka (Al-Shadady), and some of its members participated in excavations of historical sites in Der Ezzor (Halabia and Zalabia) and stole and smuggled their findings.

Due to the prevailing insecurity and the proliferation of weapons, damage and depletion archaeological sites and smuggling of historical treasures throughout Syria prevail; artifacts are sold in the black market in Jordan, Turkey, Lebanon and Iraq.

Despite the shy effort to restore the stolen artifacts at the Turkish borders as well as at Beirut Airport, national efforts to preserve the historical legacy and inheritance in the region will remain in vain without the international participation, in cooperation with the UNESCO. The help to protect, preserve and archive the artifacts is needed in order to support individual initiatives with legitimacy and the scientific means and tools to continue their work amid the shelling by the regime, which insists on distorting Syria’s map, historical sites and cultural monuments as well as on changing its demography.