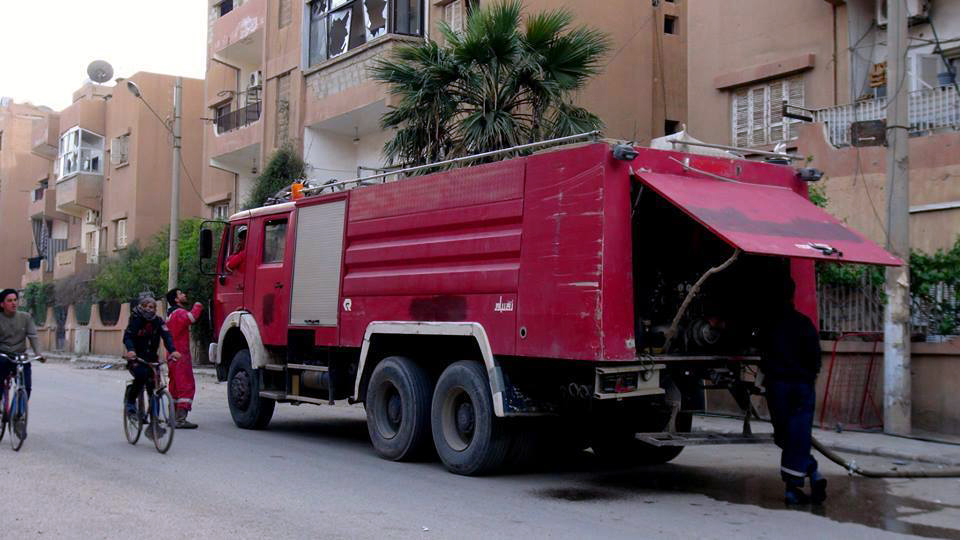 In one of the neglected schools in the neighbourhoods of Der Ezzor, some young activists work to establish a headquarter of the “Civil Defence Committee” trying to collect what was left of the tools and provide affordable aid to the people of that city. However, the formation of the body of the committee and the starting of its work was delayed in light of the urgent need for it, while the work is confined until now to individual efforts in collaboration with some of the fighting brigade.

A few months ago, activists began, in collaboration with the local council, attempted to form such a body; yet, the transition process from individual work to the regulated institutional work took too long. Baraa Al Taha, the head of the civil defence in the liberated neighbourhoods, says “We wereworking hard for several months to establish this Authority” admitting the delay of its formation. However, he justifies “the local council faced several actions that delayed its work and exacerbated the problems in the city”. Baraa explains in his conversation to Enab Baladi “this city remained, and throughout the two years of the liberation, far from the organization and the real hard work because of personal and collective mistakes and other problems that faced the activists here. Yet, we were finally able to overcome these obstacles and establish this committee in which we hope to find the essential support that will move it in parallel with the needs of the city”. Baraa follows “the tasks that are assigned to us are great; we are working to expand our staff and to gather the best of knowledge, practice and effectiveness”.

Abu Saad, the fire engine’s driver, became well-known in the streets and the neighbourhoods of Der Ezzor, trying to extinguish a fire or to rescue a wounded. He says, “we need to expand our staff and to obtain several necessary machines for our work”. He stressed, “these guys are putting on hard efforts; yet, it remains minor in light of the growing needs of the overwhelmed city with a massive destruction of its infrastructure due to the daily shelling it sustains”.

Three trucks are all what the team of the fire fighters has; these trucks are old and suffer from various malfunctions according to Sa’ed, the head of the team who “defected” from the Directorate of Fire-fighting of Der Ezzor in the neighbourhood of the Jura. Abu Sa’ed describes his work currently, “We are working under constant fear; any breakdown of any of the trucks means an increased suffering to the people”.

On the other hand, the newborn committee is trying to create new job opportunities for the people of the city. Although the work is not a subject to a contract and it does not provide a fixed wage; the simple rewards the workers receive help them cover some of their living expenses, especially as they lost their main jobs.

Ahmed, a student at the Faculty of Economics, works today on a fire truck that belongs to the committee. He says “I was scared of this difficult work, its risks and maybe the lack of harmony with the other people here, but I found myself between my parents and my brothers”. The guy who describes his work of being “tiring and entertaining” adds laughingly “we head to work at eight in the morning and we do not go back until ten at night… but we enjoy our work and we do not feel the passing time”.

In his turn, Imran who is one of the activists in the city, attributes the weakness of the civil work to “the double blockage that has been imposed on Der Ezzor, and to the disagreement that happened between the brigades”. Additionally, he states that the activists “have been subjected to actions of stealing and kidnapping, and this has included medical, relief and services equipments”. Imran points out that some devices and trucks “have been confiscated while heading to the monastery; the people travelling with these trucks were arrested. This makes the activists think a thousand times before they enter any device or truck”.  This let the besieged neighbourhoods of Der Ezzor on its own waiting for its fate in the light of the imposed pressure and retrenchment on it. Meanwhile, the activists of that city are trying to maintain the last gasp of peaceful and civil work amid all of the ruins and devastation.