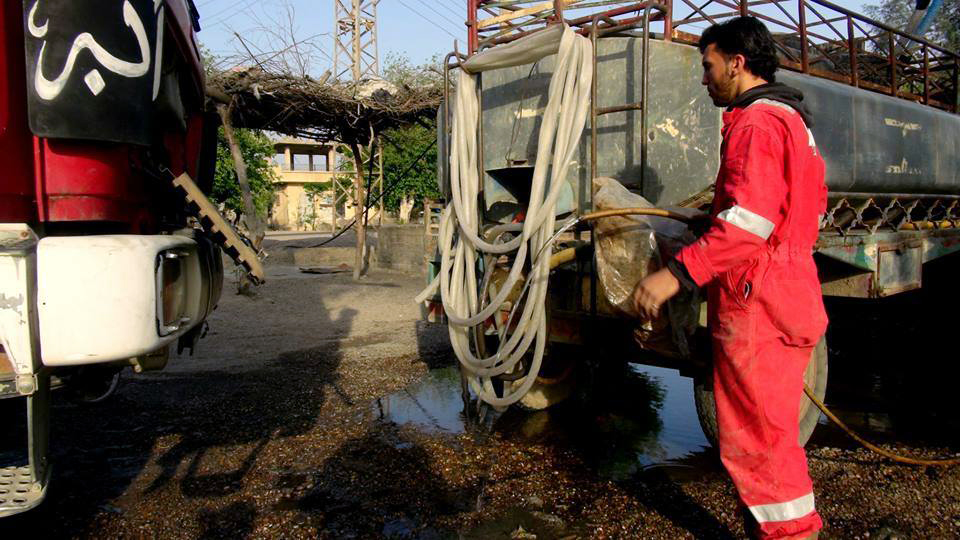 Der Ezzor- Children, women and men carrying containers to transport water to their houses has become a familiar scene in the liberated neighbourhoods of Der Ezzor. People of the city has been suffering from constant outages of water supply because of the continual bombardment and lack of maintenance services; adding to that the chaos that dominated a lot of the facilities in the city and its countryside after breaking-in the water stations and robbing its tools.

Mohammed is a resident of the city of Der Ezzor and a father of four children in which the eldest is seven years old. He cuts across several streets every day; each of them is overseen by a sniper from the regime’s side in the “Jumian checkpoint” and a sniper from the Islamic State of Iraq and the Levant (ISIS) on the other bank of the Euphrates; yet, Mohammed is risking himself every day to bring enough drinking water for his family. Pointing at the old water station, which lies at the entrance to Hawija, Mohammed says, “we could have used this station but it has become in the crossfire area of the regime and ISIS … whoever tries to go near, they will expose themselves to death”.

The banks of the river have become a battlefield when ISIS took over the villages of Husseinia and Htalh on one hand and on the other the city centre of Der Ezzor remained under the control of the “Mujahideen Shura Council”. In light of the escalation of an ongoing conflict between the two parties and the dissemination of their respective snipers, anyone that will approach the river banks will be exposed to sniper fire especially after the attempts of the Shura Council to lift the ISIS siege on the city’s neighbourhoods which did not work and resulted in the closure of “political bridge”.

Few meters separate the “forbidden” river from Mohammed’s house, which is located in the Hawijah Sager. This area considers the river water to be the main source for drinking and watering the land especially after a cut off of the cleaned water that was are transferred via pipes from the filtering stations into the city; however, this process stopped after a few months ago with the beginning of the bombardment of the city and the destruction of its infrastructure, in addition to, stealing the tools of the filtering station. Consequently, most of these stations stopped working nowadays.

Once the electricity goes off from Der Ezzor, water cut-out will follow it due to the cessation of pumping and filtering stations that feed water to the city. This makes most of neighbourhoods live in a consistent need of water.

It is worth mentioning here that the electricity cut off for long times in the city is because the main station that transfers electricity has become a main goal of the fighters who are trying to “twist the regime’s arm or expand their wealth and their influence areas” according to activists in the region. In both cases, gas lines and fields that feed the power stations Like (Kuniko field) are targeted or fighters will target electricity lines especially the lines of 400 and 66 that run in the desert of Der Ezzor.

The lack of water in the city’s neighbourhoods has burdened the “Civil Defence Authority” with new tasks that include transferring the water to the neighbourhoods and whoever is left from their inhabitants, in addition to the fighters on different fronts. Abu Aboud, a dissident officer, oversees the work of today’s civil defence and he says “our work supports fronts fighting in the city and helps fighters to strengthen the resilience of the remaining people here”.

Nonetheless, Bara’ al-Taha, the head of the Civil Defence Committee, says “we are trying as much as we can to secure electrical generators that will help us to be self-sufficient but all our attempts were faced by the constant fighting and the imposed siege on Der Ezzor”.

Thus, the city of Der Ezzor, which is considered to be the largest inventory of water and electricity in Syria, is deprived of its simplest wealth, except for its oil wealth, where the influential forces in the region including Assad’s forces, the opposition forces and ISIS forces are trying to control it.