Syria’s Childhood, Where To? 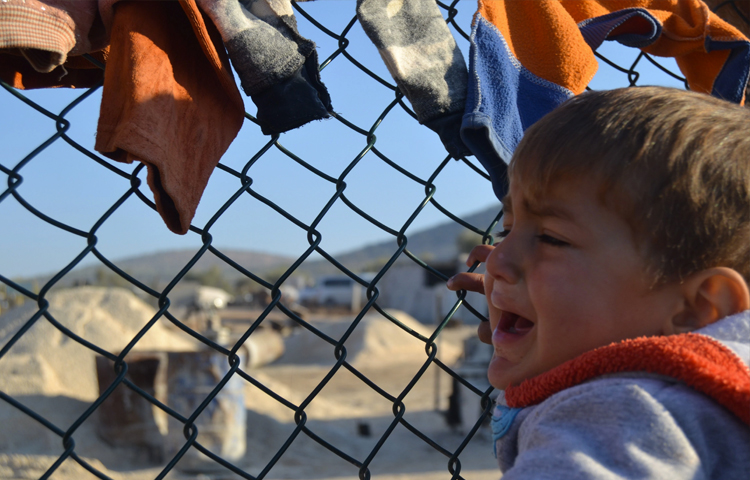 Here is the grave of my brother Mahmoud….. this was the phrase with which Nour a twelve year old girl started her conversation before she broke out in tears, and stopped in mid a state of absence and a hard look of stiffness was drawn on her innocent face, all that because she remembered scenes she saw in her neighbourhood, before she was forced to flee with her family to a tent on the borders, because of the conflict. At that time Mahmoud was still beside her, she smiled for a moment and then returned to the state absent mindedness only to be returned to the present in the cold tent by her mother calling her “Nour my love”.

Nour is one case of 5.5 million children affected, as mentioned by UNICEF in its report “Under siege”, in which a lot of aspects that had a devastating impact on the Syrian children during the last three years were mentioned. And the report stated the amount of violence and abuse the children were subjected to in and outside Syria living as refugees, and it also stated the horrific increase in the number of children affected between 2012 and 2014, which was estimated in 2012 to be 500,000 children to rise to 2.3 million in 2013, only to double in 2014 to reach 5.5 million affected children.

Children are the greatest victims of the starvation policy used by the Syrian Regime in a lot of areas, and reports from the besieged areas indicate that the circumstances are absolutely the hardest and severest ever, and doctors in and out of Syria who are familiar with the current events reported an increase in the number of children suffering from malnutrition and sick children in need of treatment, and these cases impose a great risk on the children because of the negative impact it has on their normal growth, and it is a good reason to be alarmed at the state of childhood in Syria. This is a great threat to following generations, the damage is going to be great and irreversible especially on newborn children whose first few days are the most important stage in their lives. The doctors also stated an increase in the number of children suffering from deformations like dwarfism (children being shorter than their peers)  because of malnutrition or their brains not growing normally.

Malnutrition and the deprivation of physiological needs (food and water) will have a negative impact on their health and will cause them to be more affected by contagious diseases and other illnesses which will have a negative impact on their ability to acquire knowledge when they grow up, beside a weakness in fulfilling their psychological and social needs like love appreciation and  security, which might affect their personalities and their ability to interact properly with the surrounding social environment.

Childhood amid War and Violence

Wars and crises and the psychological pressure caused by them are considered to have a dangerous effect on children, because of their impact on the children’s behaviour. In the shadow of a regime with no humane considerations, and practising destruction and assassinations under the sight and the hearing of whole world, children are going to be affected the most, because we will see a lot of children with disabilities and suffering from intellectual disabilities, loss of concentration, and a lot of things that no child should be exposed to.

Omar, a 4 year old Syrian child, a refugee in one of the camps, carries his pain inside of him and he shows it, he lost his legs after his home was bombed and destroyed. As you see him in his mother’s lap crying and scared all the time, you can sense the fear and terror of his elder siblings, even when they’re out of their country you can see their fear of bombardments and killings and their negative reflexes towards people around them, and you will be sure that fear is a way of life for them.

A lot of parents inside Syria and out report psychological problems their children are experiencing like sleeping disorders, continuous crying, screaming, involuntary urination, withdrawal and nightmares of people coming to kill or eat him – childhood imaginations- so they  close they eyes believing they can save themselves with their innocent childish techniques.

All these symptoms mentioned are the symptoms of post traumatic stress disorder PTSD, and they can be reduced with therapy and when possible with the help of a psychological therapist.

The environments in the houses and tents are not suitable to take care and help those children. Mothers don’t have the necessary calmness and are unaware of how to deal with them in that severe state, so the children live with their fears and inner conflicts that reappear in their dreams like frequent nightmares or in some physical and behavioural disorders like nail biting and involuntary urination etc.

Some children may not show any sorrow or pain during their childhood in spite of what they experienced but their evolution will be negatively affected by these experiences, the traumatic experiences will be revealed in their playing and activities after some time, because the most dangerous effect of war does not show during the war but afterwards in a whole generation who survived the conflict and carried all the countless psychological problems with them.

All children are suffering from those conditions, and others have been deprived from their right to learn and they are facing a life of loss and vagrancy, like many of their peers.

Issam, 13 years old,  is not going to school like he used to and is now working in garbage collecting in a nearby country to get enough money to help provide for himself and his family, and you see him sometimes crying missing his school, because he was not used to hard work for long hours.

According to the latest UNICEF report, more than ten thousand children died between 2011-2014, the number of children born as refugees has reached 37,000 children, more than 3 million school aged children are deprived of education, more than 300.000 children under the age of five are living in besieged or hard to reach areas, and 8000 children arrived to the borders without their parents.

Depriving children of education means depriving them of a chance to fulfil their mental and knowledge needs like the need to explore and investigate, and depriving them from expanding their lingual skills that they would have obtained in school environment which has a big impact on the degree of psychological pressure they are experiencing.

So all the international children’s organizations should realize those facts and implement quick solutions to help those children, and help their parents guiding them to the right way while providing psychological and social assistance suited for both sides. They should provide doctors and psychological experts to meet the needs of both children and parents.