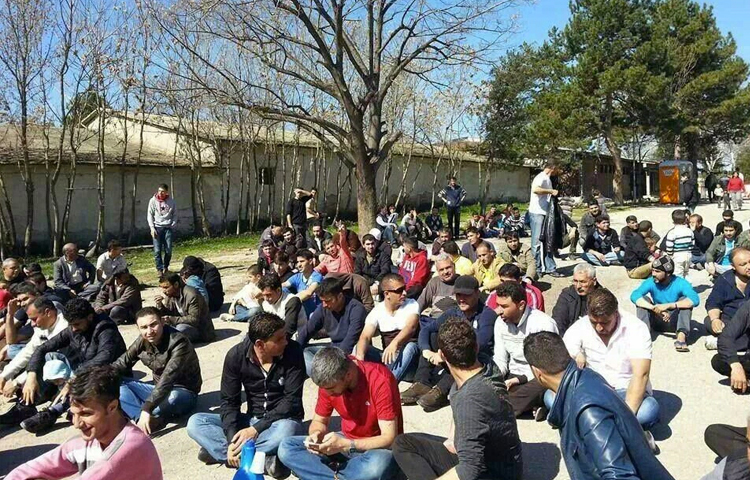 Syrians began to flee out of Syria, since the situation inside Syria began to get worse; they were afraid of shelling and imprisonment and just looking for a safe and stable living.

All eyes looked to “Europe” because it represents the perfect world for their broken dreams.

There, where they will find Asylum, a humane treatment and citizenship in the blink of an eye; that is the way smugglers speak of Europe. It is the road to heaven. They would tell them anything because they make their living from refugees fleeing their tragic lives, and what a thriving business it is. They are trading with the lives and pains of refugees.

Anas Abu Malek defected from the regime’s Army and fought with the Free Syrian Army in his town. Until he was shot more than once, and his relatives who live in Germany persuaded him to go there and seek treatment. His journey began by going to Turkey and from there to Bulgaria with a smuggler, and it ended as a prisoner in an inhumane Bulgarian refugee camp, where he spent 6 month as a prisoner of strangers.

He said: after the revolution reached its current situation, and people despaired from a near stop of bloodshed, the goal of these people is to immigrate to Europe for a better life. I went to the Turkish city of Aderna, before getting to Greece, but because of the tight security on the borders I walked to Bulgaria through woods. The road took us 4-5 days depending on how fast we walked, because there were women and children in the group. Many elderly people died before reaching Bulgaria, one old woman died and was buried in the woods and another one arrived exhausted just to die in the arms of a Bulgarian policeman.

Anas was lucky because his relative paid for him to get transported by a car, with an Immigrant Iraqi family, to the Bulgarian borders. There, they had to cross the borders running to the other side, where there was a van waiting to get them to the city of Blodive to find another man to take him to another village where he would stay for a month. The man had managed planned for him to travel on an airplane to Germany. The plan failed, and a fake ID was provided for him to cross the Romanian Borders, only to be suspected by a policeman and be taken for interrogation, and the story of him entering Bulgarian detention camps began.

“The state of prisons is dreadful and there are women, children and elders among prisoners”

Anas and another detained Syrian family were moved to a three cell prison, he continues: After two hours I was interrogated, after I insisted that he was not Syrian, I continued to speak in English and claimed I was Turkish Bulgarian. After two hours I was interrogated again and then I gave up and wrote my true name, then the Bulgarian police brought a Syrian  translator, the interrogation lasted for three hours and it was about my studies, my work, my religion, my city and my political point of view. I had my doubts that the translator was twisting my answers. I returned to my cell with a little food and then I was interrogated for the third time, at that point I was photographed and my fingerprints were taken and I was taken back to my cell.

In the dirty cell according to Abu Malek there were families with little children, then the police came and took some young men among them was the father of those children, so they started to cry and shout with their mother. He was then transported by dawn to the prison of Viden and he was trailed with the charge of illegal border crossing and at the end of the trial he was told that he would be released when the two-day vacation was over. But he was detained for 57 days during which he did not see the daylight or have a breath of fresh air. After that Anas found out that the term “two days and you will be released” was a mean scam from the translator to blackmail the prisoners and take all their money in return of his alleged efforts to release them. While in fact, the sentence for traveling with counterfeit documents was 55 days in prison. I served my entire sentence, then I was released from that prison to be transferred to the prison of Posmancy to spend three more months.

In prison you get three meals a day, but they are mostly not edible, according to Anas. And there is a doctor who provides painkillers only, proclaiming that their injuries and illnesses are above his skill level and need a hospital.  The journey of Anas ended in Pastargor Camp   waiting for a solution with no money, family or supporter, eating when he has some money or when someone feeds him.

The detention of Syrians in Bulgaria had many types, the worst is when they discover that you were fighting with the opposition, then you will disappear in their prisons and no one will know where you are under the pretext of threatening the national security. Three men who were with Anas were taken to another prison because they used to carry weapons; nobody knew where they were or what happened to them. The Syrian Embassy works hand in hand with the police to catch the oppositions of the regime.

On the other borders towards Greece, endless tragedies, people end up drowning in the sea or imprisoned by the Greek police on their journey towards another country that will give them the status of war refugees. Khaled SH. also fled from Syria afraid of being detained after there were many detentions in his city in retaliation of their uprising against the regime. He fled to Lebanon and left the country after 6 months because of the abusive treatment of Syrians there. He traveled to Jordan and left for the same reason with a goal to reach Europe. But his journey ended in a detention of another kind.

Khaled with the help of a friend coordinated with a smuggler and left Turkey towards Greece by land then crossed the borders on a small rubber boat with three other young men and the smuggler, and they reached the Greek side after 25 minutes and stayed there until the coast guards left the area at night. Then they started to walk for two hours until they reached a village where he stayed until the morning and continued towards the regions center and then to another city to a train station to reach Athens in the middle of the night.

Khaled said that his journey to Greece cost him about 2300 Euro and upon arrival the smuggler took me to his house and did not allow me to leave until he got confirmation from his relative in Turkey that he received all the money. After that I tried to leave Greece by plane but I failed many times, and I wasted all my money.

Khaled continues: I tried to leave by an airplane three times, and each time I would pay around 500 Euros for a ticket and a false ID. I got caught every time at the gate by the police and I’ve been taken for interrogation and then released, one time my bag and all my personal belongings were left on board the airplane. The third time I was detained in the airport prison and a translator was provided and they took me to court the next day, the translator told me that I am in great trouble and I should get a lawyer with 800 Euro as fees, and I agreed because I had no other choice, under the condition that I get released from prison immediately. I got the lawyer and I was sentenced to 6 months in prison for entering the country illegally and counterfeit documents, and I was transferred from prison to prison until I was imprisoned with drug dealers, then to a prison with life sentenced prisoners. I stayed there for 2 and a half months until a general pardon was issued and I was deported from Greece to arrive to Italy where I was imprisoned too. Then I left Italy towards Austria, then Germany, during my journey to Germany I was imprisoned in Italy for a few days before reaching my final destination.

And so the tragedies of Syrians reach beyond the seas in a search for a safe haven in the West, but it almost ends in prisons all the time after they lose all their money in the search of smugglers and many attempts end in the prisons of Bulgaria, Greece or other countries. Neither the Syrian coalition nor the temporary government took any procedures to solve this great issue that almost always ends by drowning or imprisonment and seldom with a happy ending. The biggest loser is Syria because it loses its men wherever they go