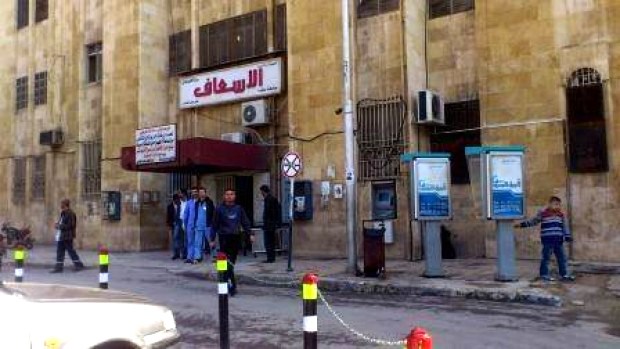 At the time when the pace of the bombing barrels increased on the neighborhoods of liberated Aleppo, the number of casualties increased dramatically and it is becoming no longer possible to pass drugs and equipment from the crossing distance in the neighborhoods of Aleppo which is under the rule of the regime. The supported institutions for the Local Councils and the Medical Board’s bodies which are supposed to be “revolutionary” are contributing to increase the tragic scene. The migration of doctors to outside liberated Aleppo during the last period is adding insult to injury.

Yusuf, an activist in the medical field, says: “The reason of migration is this great disparity between the salaries of the doctors in Aleppo city and outside Aleppo; salaries are increasing as we get closer to the Turkish border where the salary of a doctor outside the city of Aleppo who is working only 3 days per week is

$ 2,000, while in Aleppo the salary of a resident doctor who is working for 24 hours daily with one day holiday is only about $800. It is worth to mention that the high pace of the bombing and the advertisement of besieging Aleppo by the regime forces is another reason of doctor’s migration with their families outside Aleppo.

And about the reasons for this disparity in salaries, Abu Amira, a doctor at a field hospital that follows the Medical Council of Aleppo, said: “It’s the policies of the supporting organizations that are trying to empty Aleppo from activists and doctors. The salary, even if it is very less, used to meet the needs of the doctors and the rest of the workers in the Medical Centre in Aleppo; however, now it is not enough to support the doctors and workers’ families who have fled to Turkey and that has led to the migration of the staff abroad. Now, we are working in our hospital with half of the staff with the same little salary, and with an increase load of pressure, work, massacres and large numbers of victims”. He added that the Medical Centre is very weak and it is unable to present itself in front of their supporters which are controlling it however they like.

In this regard, Omar Abu Ghaith, an activist in the medical field, explained that the argument of the supporting organizations is the lack of professional scientific degrees of the medical staff in Aleppo; however, 80% of them are doctors in their last years of specialization and because of their revolutionary activism, they could not complete their degrees. Not to mention that the supervisory role of the supporting organizations on the ground would be “safer and much easier in any of the cities and villages on border than the liberated city of Aleppo that is facing a continuious violent bombing”.

A lack of doctors and specialists, which is resulted from the recent immigration, is accompanied with a lack of equipment and medicine. This situation has led to cases of deformities or even death especially at the time of bombing and shelling. Yusuf mentioned that the occurrence of several cases of amputations is due to lack of vascular doctor in the city, and Omar Abu Ghaith added: “many death instances occur due to the lack of equipment, medicines and also surgeons, especially vascular, nerve and bone surgeons”.

The recorded number of casualties from interior diseases such as Hemophilia, hepatitis and cancer are due to the lack of availability of necessary medicines, and even the blood bags are given to the patients without being analyzed due to lack of detective equipment and a lack of plasma bags. Also, we have not got the centrifuge to separate the plasma because this machine costs 50,000 dollars”. Abu Ghaith added that “doctors are forced to perform medical emergency surgeries with the local anesthesia under the lights of lighters because of power outages at most of the time”.

According to Yusef, two weeks ago he went to bring some medicine and consumables from the free Directorate of Health and the director was present so he said to the repository keeper; give him anything “except medicine” and he told him that medicine is only for the countryside. For his part, Abu Umira attributed this lack of organization to the onslaught barrels and the clashes with the Islamic state that led in its turn to the suspension of the convoys that are loaded with goods on the border for long periods. He added: “we reached the time one day where we did not find any chest bombing flask in all our hospitals”.

In liberated Aleppo, there are several boards and medical bodies, each of them has hospitals, doctors and staff of its own, and each one of them receives support from various organizations; however, they all should be united under the name of “Directorate of Health”. Omar says “There are 15 centers for Leishmania treatment in Aleppo. The pharmacological and medical accessories’ support of cotton, sterilizers, gloves and plaster comes from “Mentoor” organization while, the logistical support of salaries and equipment of heaters and chairs comes from somewhere else, and I myself do not which organization they are following. I work in a hospital that follows the Liberals Aleppo doctors committee, and I take my salary from an organization and my supervisor follows the health Directorate of Free Aleppo and the medicines support is from another organization”. In Omar’s opinion, this multiplicity of support sources creates problems and chaos.

According to Abu Umira that the arguments that are always given to them about the multiplicity of medical actors, is the absence of a supportive organization that can sufficiently cover all the requirements of the hospitals such as salaries, medicine and other consumables so we have multiple agencies supporting one hospital. Abu Umira concluded by saying: “the biggest dilemma remains as the supporting organizations considering that they are giving us our salaries as charity except for the bad financial distribution. The least salary of an employee in Turkey who is living a luxurious life is $800 which is the same salary of a doctor who is working 24 hours per day and living the worst living conditions”. He added: “once a VIP person from a supportive agency visited us at the medical point, and we had to give him a bed with other two doctors in a modest and small room. This VIP expressed strong resentment from the bad living situation of the doctors, and he promised before leaving the next day to allocate a certain amount of support to improve the living situation of medical staff and of course “we have not heard back from him”.

And between the displacement of doctors in Aleppo with a shortage of medicines and medical equipment, the politicization of the supporting agencies, which is now supporting certain hospitals than the others which are more practical, important and more present on the ground and thus require greater support, and because some medical boards are busy with elections to gain positions of Minister of Health and its Director, the doctors and medical staff in liberated Aleppo are underlining the best tournaments and sacrifices under the continuous bombardment to save what can be saved from people’s lives in the light of the available poor possibilities and the meager salaries, away from the noise and “exaggerations” of the stakeholders.