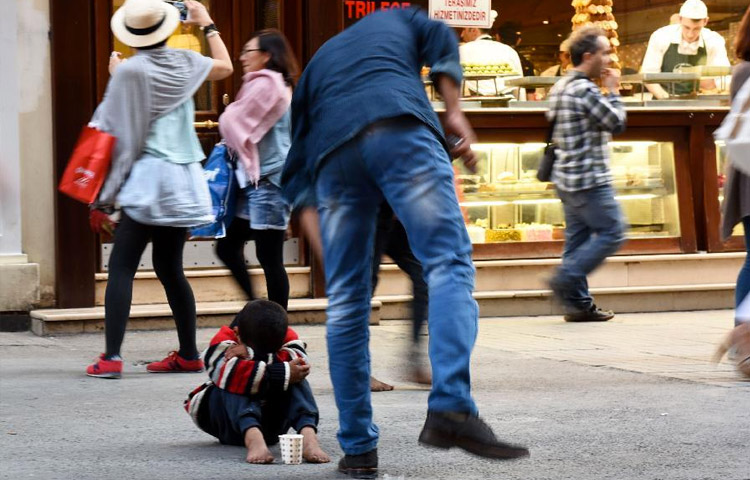 Sociologists think that the main reasons behind beggary are poverty, ignorance and bad living and health conditions. Beggars are likely to have apparent bad health conditions, like mutilated limb,   paralysis, or retardation.  Those people tend to use certain phrases to attract passenger’s generosity like “help, I’m in need”, “Give me from what God Has bestowed on you” or “May God keep your children healthy”, or any similar phrases that evoke sympathy.

However, things seem to be different in Istanbul! Syrian beggars there (underage or mature) look healthy; they have no injuries or handicaps. Those beggars try to evoke people’s sympathy by saying:   “Help me, I’m from Syria”

Enab Baladi met Syrian children and girls who have become professionals at begging in this area and investigated the problems that they face and the reasons that forced them to beg. They also met a number of Syrians who live in Istanbul to discuss this phenomenon.

Raed, a 13-year-old teenager, originally comes from Masakin Hananoin Aleppo, and lives now with his mother and sister in Istanbul, while his father, who also begs for living, lives in Urfa. Every day, Raed begs near Aksaray metro station, holding a paper that reads in Turkish “I’m from Syria, I’m in bad condition, May divine favor rest upon you, I need help”

Raed said that he hates begging for money, but he was obliged to do it because he had to pay the rent for the house where he lived with his family. Raed added: “Sometimes I collect 100 TL or less”

Raghdah, an 11-year-old child, also comes from Aleppo. She lost her dad years ago, and her big brother earns a small amount of money from his work as a guard for a building that is barely enough for paying for food and the house rent, as she said. So she, her sister and her mother beg to get money to buy medicine for her ill brother who has diabetes. But Raghdah refused to show us her house and ran off hastily when we asked her to take us to their house in order to help them.

Mohammad Juma, a 12-year-old child, is another child from Aleppo. He doesn’t want to give up begging, he doesn’t deem it to be bad. On the contrary, he thinks that he earns money with the sweat of his brow. When we spoke with him he answered with a tense tone, and he swore at us when we asked him about the reasons that forced him to beg, but after our insistence he said: “I leave home early and get back after midnight, I endeavor to earn the money for my family and no one has anything to do with me”. At the end of our talk with him, Juma asked us to give him 5 TL, and when we refused he swore at us.

Another girl, in her twenties, refused to reveal her name and she seemed very sad. Her case is different than Raed, Raghdah, and Mohammad; she doesn’t beg in the street, rather she walks and tries to get close from the passengers to ask them to buy her food or bread, she says:  “I don’t want money, only buy me bread and some food”.

Muhammad, a university student from Idlib, was sitting near when we interviewed one of the children, he reached us saying: “don’t believe him, all of them are liars, begging is a profession for them, they manipulate people’s feelings”, Mohammad added: “one time, I gave a child 5 TL after he told me that he has no house and that he has been sleeping in the park for a year, nearly after a month, I was sitting at my friend’s real estate office and I saw the same child entering the office and paying him 500 Liras. ‘Have he paid a rent?’ I asked. ‘Yes’ answered my friend. He assured me that he has been in that house for almost a year and a half.”

However, Husam, a graduate of Tishreen University, faculty of Education, has a different point of view: “There might be some who aren’t in need but still do practice begging. However, I think most of them have bad living conditions and were obliged to beg. Both ways, it is the responsibility of dozens of opposition’s establishments a few meters away.”

In accordance with an item of the by-law of the ACU which provide for providing assistance to all needy Syrians who were aggrieved by the destruction and ruination machine, and after some Syrians wondered about the responsibility of the numerous opposition’s establishments in Turkey towards this phenomenon, a few days ago, we contacted the ACU through their official email. We summed up the phenomenon that we have come across in the last few weeks and inquired about any measures taken by the ACU to face and control the phenomenon of Syrians begging in Turkish cities. However, we haven’t received any reply till the moment this investigation was published.

Mr. Muhammad Ma’moun, a psychology graduate and a psychology adviser in a school in Damascus, answered our questions about this phenomenon and talked about its effects on the society and its members: This phenomenon isn’t caused by poor societies, but rather it is common solely in ignorant and disassembled societies. Some societies, though poor, have moral and religious values that make them maintain the unity of their families and their members since their childhood. However, poverty in some societies (materially and morally speaking,) which leads to the lack of the moral deterrent, creates a look that sees any job, no matter how cheap it is such as begging and prostitution, as a career. Hence, leaderships of big gangs of child baggers emerge. Such leaderships exploit children to practice begging in charge of protection and some money which children lack in their disassembled society. This makes children go for such career which they don’t see as a disgrace in the first place because of the way they were brought up to.

Concerning the effects of this phenomenon on the future of children, Mr. Muhammad adds:
The unfortunate presence of these children will lead to an unknown future of practicing theft, robbery and other disorders that spread in the societies. That is why governments are keen to combat this phenomenon to maintain the integrity of their societies.

In Istanbul, the most attractive city for tourists from all over the world, it is rare to see any local beggars. Moreover, while most needy Turks have turned begging into an entraining job by singing and playing music in public streets and metro stations for Liras that people bend to put voluntarily, some Syrians, a few meters away, stand in worn clothes and humble faces with their Syrian passports and IDs and run after the passers-by clinging to their clothes and bags… “Help me! I am a Syrian” in a process that promotes the worst image for Syrian people in the city that embraces the Syrian cause most.