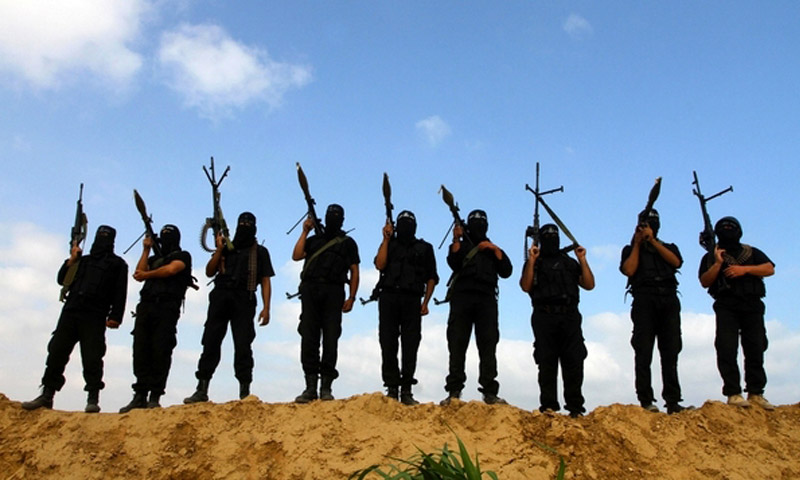 Jihadists of the Islamic state, have they been misled?

Jihadists of the Islamic state, have they been misled?

“In al-Atareb we caught one of the “Islamic state in Iraq and the Levant (Sham)” ISIS foreign fighters and when we questioned him, he said that we fought and we did not know we are fighting the Free Army free, our princess has told us that we are here in Nubul and Zahra”. This is what Ali Abram said, a fighter in the Army of ISIS, he mentioned that many of ISIS fighters are missing the reality and most of them are foreign immigrants. Also he stated that once they asked a fighter, who is a Russian, if he knows who is he fighting and he replied in a weak Arabic language that he is fighting the infidels. Whereas one of the Syrians who is fighting for ISIS answered that he knows that he is fighting the Free Army because they are “apostates infidels”. Abram added “you can feel the hatred clearly among the Syrians and Iraqis detainees, in particular from ISIS, which does not appear with other detainees of immigrants, they are more kind and they have been misled from the reality”.

While talking about the process of communicating with these prisoners, Abu Orwa Taibana who is a fighter in the Army of the Mujahideen said that there are Syrians, Iraqis, fighters from the Gulf, as well as Chechens and Bosnians and others among the prisoners by the army of the Mujahideen. He said that they are suffering because of the language barriers and the lack of interpreters to communicate with the non-Arabs. He adds: “When we had discussions with them and attempted to raise their awareness, most of them had shown unwillingness to dialogue and they accused us of blasphemy and apostasy and they asserted that their state will remain”.

Abu Orwa said that one day and at the morning prayers, a car came to the headquarters of Jihadists’ gathering where four masked gunmen had got out of it; one of them immediately threw a grenade at the guards and killed them. After that, they entered the building and clashes took place and then two of them blew themselves up. This explosion has resulted in demolishing part from the wall of the prison in which it enabled one of the ISIS Jihadists to enter the prison. A Saudi immigrant came to this ISIS fighter and told him that he is a fighter of ISIS as well, but the former threw a bomb on him inside the prison that resulted in killing five of the prisoners.

At the end, a Bosnian immigrant came and took the weapon of the guards and killed the fighter. He shouted and pointed to him “he is killing the Muslims”. This shows that there are two types amongst the ISIS fighters. One type is like this young Bosnian who have serious doubts about the organization after realizing at the end that those who wear explosive belts are the members of ISIS. Another type of those who are of fanatics of ISIS who consider that the people who came to blow themselves are not members of ISIS and what the Mujahideen Army did is just a “play” to kill them.

As for the reasons that bring them to Syria, Abu Orwa said that most of them have migrated for themselves and their religion to al-Sham countries to fight against the Assad regime and its allies of Shia, Russians and others. The majority of the immigrants in the beginning have joined al-Nusra front and Ahrar al-Sham brigade since they are the salafi groups in Syria. While only few people have joined the Free Syrian Army. After the proclamation of the “Islamic state in Iraq and the Levant” a lot of these immigrants have joined it especially when they used the term “state” and the promises to be an organised state with a certain structures and ministers, furthermore, these immigrants were convinced that al-Baghdadi is a descendant of “Quraish” which allows him to be a caliph in the earth. And this is how the immigrants have been attracted by al-Nusra front and how they controlled the sources of the jihadists in other regions and recruit them to Syria. Abu Orwa added: “We do not deny that immigrants have come to our country with great emotion that cannot be described; the passion of achieving the victory for the Syrian people and restore the glories of religion and establish the Islamic caliphate”. The Islamic state (ISIS) has relied a lot upon this passion to attract immigrants. According to Abu Orwa, the Islamic state (ISIS) is taking all the personal items of any fighter who is coming to fight with them with all communication devices in his possession to start the process of brain-washing and elimination from reality.

Checkpoints to arrest the fighters of ISIS were erected in the streets of Aleppo, but most of the members have surrendered after they were given the safety and security of themselves, their money and their weapons. While some of them rejected this situation, they have been besieged in their headquarters or the building that they have been trapped in, and after negotiations that evolve into mild clashes, they eventually surrendered. About the way they deal with prisoners, Abu Orwa gave an example when four members of ISIS had refuge to the building of the post office in al- Hajj Bridge where they had been besieged for few hours; two of them had surrendered while the others refused to do so. The clashes continued while using light weapons “until we suddenly heard crying children in the building. Upon inquiry, it shows that there are two sons of the fighters inside the building, and accordingly orders were given to cease fire immediately respecting to the feelings of the children. The father refused our offer to give us the children to get them to their home; however, one of the leaders brought his son and asked him to enter the building with food and drink for the two children. After that, the two members surrendered themselves when they saw the good treatment”. For his part, Ali al-Abram said “we treated them in a great way as if they are from us, and we provided them with food, drink, hot water, clothes, blankets and Internet”.

When we asked Abu Orwa about the fate of these prisoners, he replied: “we will keep them until we agree on a reconciliation initiative in which, if happens, it will include a paragraph about the prisoners, or we may have an exchange agreement between us and their prisoners. We might deport those who decide to leave the country. Generally, till now we have not yet decided on something clear regarding the fate of these prisoners”.

The task of attracting fighters in ISIS who are fighting on the fronts, and joining them to the FSA is the most difficult task in trying to find a solution to inject the blood of Muslims. According to the activist, Ward Furati, to Enab Baladi newspaper about this project “We are now working on drafting letters and translating them into languages ​​of non-Arab immigrants, especially Chechens. We will record these speeches and broadcast them on the fighting fronts to try to influence immigrants from ISIS here”. He added: “We are now in the process of conducting a scheme aims to educate immigrants that they are our brothers and we fought them because their organization got titanic and not because we do not want the law of God. We must first explain to them the complex Syrian situation where we are facing all different intelligence agencies in the world. Secondly, the Muslim Syrians have moved away from religion because of 40 years of deliberate neglect by the regime and we want the law of God but each country has its own way of understanding this phrase and applying it”.

Perhaps the “Nation’s initiative” that was launched by Sheikh Abdullah Mahiseny on Thursday, giving a deadline of five days to ISIS and all revolutionary brigades to resolve the conflict between ISIS and the FSA to be the last chance, as seen by many, especially after it was preceded by several similar initiatives, and all of them restored to a neutral judicial body to stop the blood shedding but has always been met with complete rejection by ISIS.