Ghouta and Southern Damascus: An Escape from starvation to Death by Snipping 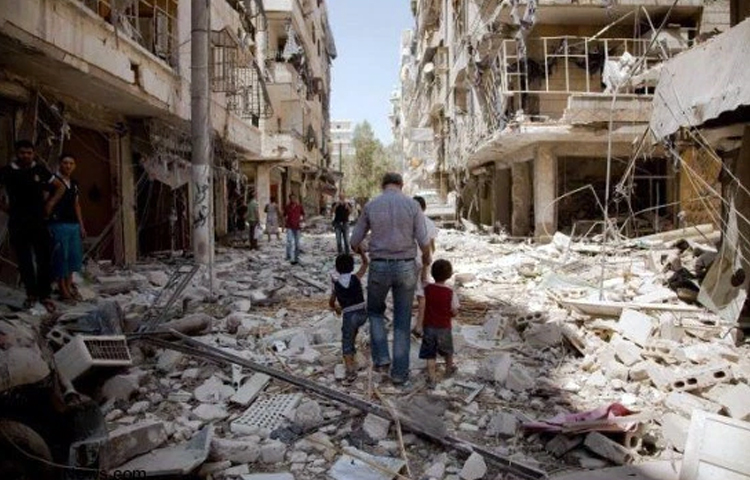 The Damascene Ghouta –also known as Damascus Suburbs- has entered its second year of the suffocating siege, while the south of Damascus has completed its six months or more. This siege has deprived residents of the most basic necessities of life; there is no water, no medicine, no electricity, no food, and no warmth. This siege has exhausted all their strength; there is no way out of it or a way to break it. When the humanitarian assistance was prevented to reach this area and all the humanitarian appeals to lift the siege failed, people had no way to escape except fleeing through the regime’s checkpoints that surrounded these areas like a bracelet. When people ran out of the supplies and they did nothave a loaf of bread for more than eight months, they ate paper trees and even “cartoon paper”, they felt that all the ways out and plans failed so the risk to surrender themselves to the regime checkpoints or the attempt to overcome them was the only solution they had even if led them to death.

According to Damascus news network, the Palestinian factions of the Free Syrian Army (FSA), in Yarmouk Refugee Camp, launched a truce initiative with the regime and the General Palestinian Command that is led by “Ahmed Jibril” in order to lift the siege on the camp and allow the food aid to enter the camp. In return the FSA factions had to leave the camp and the non-armed Palestinian factions were allowed to stay in the camp to manage its affairs. Indeed, the brigades of the FSA withdrew while waiting for the implementation of the remaining provisions of the initiative; however, the regime started to procrastinate and to impose “impossible” conditions in which they showed that they will never be implemented. Consequently, people went out for demonstrations towards the regime’s checkpoints demanding to lift the blockade and to open humanitarian corridors. In return, soldiers of these checkpoints opened the fire on these people and caused a number of wounded and martyrs.

And on al-Hajar al-Aswad checkpoint, an incident was repeated when a number of civilians; women, children and elders tried to get out of their hometowns and the regime’s soldiers opened heavy fire machine guns toward them which result in the death of approximately fifty martyrs. The regime soldiers pulled some of the people’s dead bodies and burned them while members of the FSA were able to take other dead bodies. Attempts to find more bodies put the lives of others at risk, and the death counter is still continuing.

In the south of the capital, Dr. Wardan Nasir said that civilians “imagine” in every day that the regime will sympathize with them who have been in a large prison in the southern part of the Syrian capital, where no food, aids or supplies reach them, but only snipers bullets do. Dr. Wardan Nasir confirmed that the number of martyrs who fall on a daily basis on the regime’s checkpoints range between two to ten martyrs, in addition to hundreds of injured people in the region “which our hospitals and medical points, that are spread in all the regions, are packed with their bodies”.

“In Beit Sahm there is another story where I [Dr. Nasir] was on a date to meet the “so-called” reconciliation committee and by giving the forces the order for this committee to cross, hungry people of children, women and elders ran towards the checkpoint to get permission to go out but the bullets of “revenge and blind hatred” of the regime soldiers were earlier than people’s steps, and they were pioneered to their bodies. According to the testimony of Dr. Nasir, who concluded his speech: “The problem is that this incident happens every day and people from hunger and severe cold do not get bored, as if they wanted to commit suicide every day”.

In al-Ghouta, Enab Baladi’s correspondent mentioned that civilians in this area, who are trying to escape because of the severity of the siege and the lack of minimum living requirements, are exposed to the shooting of snipers because the whole city is blocked from all sides, and the regime is patrolling constantly to monitor the roads nearby the checkpoints. The regime’s forces arrest some and snipe others, these bodies are dumped on the outskirts of the roads to be recognized after several days.

For those who can escape from the danger of “snipping” they do not survive the risk of arrest, as it happens that people got arrested after they succeeded to get out of blockade areas “miraculously” to hack the regime forces into their homes and detain them as a result of “news” about them.

Al-Ghouta and south of Damascus are still paying the price of their resistance all that time by dying because of starvation, oppression, and betrayal of all the parties. Their determination remains a legend; its lines are still written with the blood of steadfast and trapped people.