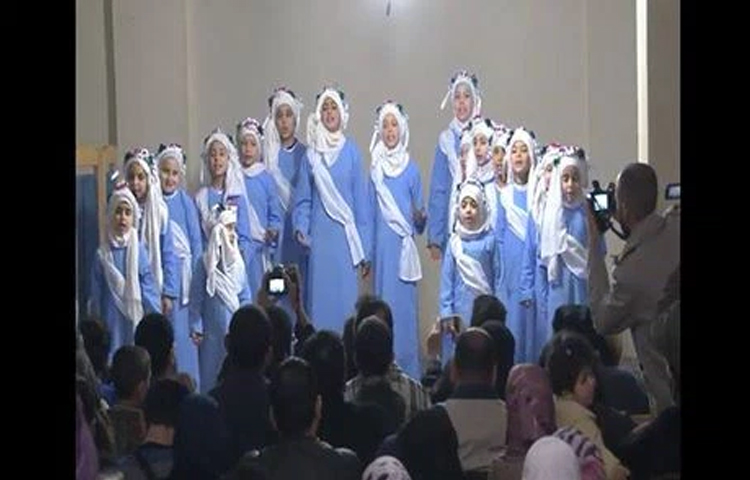 Simultaneously with the international women’s day, the first amateurs’ theatre work was launched in Der Ezzor, established by a movement called “Nushata’  [activists] and meant to recruit talented kids for acting in a critique performance of the political and social reality. The movement has been regarded as pioneer in the civil and political domains, and runs a large number of activities in the city of Der Ezzor; amateurs and kids’ theatre was the most recent one.

The idea had begun a couple of months ago by presenting a musical show followed by a short documentary, and thereafter the idea was developed to a theatre where social and living reality, in Syria in general and in Der Ezzor in particular, can be reflected and criticized. The idea was meant to reach to everyone at all ages and levels of education, and therefore, it took the spoken dialect as a medium of performance instead of using rhetoric and affectation.

Ammar; the writer and director said “We want the theatre to be a mirror to our reality and a reflection to its features, whether negative or positive”. He added, “We seek to make the theatre’s influential speech a catalyst for change and a form of peaceful movement that stands against injustice and tyranny wherever they come from”.

Der Ezzor lacks usable theatrical showrooms given the continued war situation the city has been exposed to since the official army’s raid in summer 2012. This has resulted in  death of thousands and mass destruction that affected the city’s construction especially the state institutions such as schools, and the cultural center’s hall and theatre. Add to that the lack of qualified staff to train children or write plays’ scripts. Therefore, the movements’ members have fully relied on themselves in establishing their own private theatre, using schools’ seats and writing their plays’ scripts. They basically emulate pre-existing short scripts within which they include the message of their play. After that, constant-training workshops would be carried out continuously over two months.

This group has made an enthusiastic start by their first play that discussed one of the most sensitive topics; namely the political capital; which has had a significant control over the corrupted and those who call themselves rebel activists. It also has illustrated how they have become such dolls driven by other counties, stakeholders and those who have their own agendas based on their good at the expense of the revolution and revolutionists’ sake.

In an attempt to avoid addressing problems without discussing possible solutions, the group has suggested that the educated and elites should return to the country, carry out their leading role in society, and at least give it some guidance and supervision. The challenges and difficulties surrounding this solution have been made clear in the play, yet the solution was believed to be “better than leaving things so aimlessly” given the revolution has become in its fourth year.

The show lasted twenty minutes and caught audiences’ desirability and interaction. They have expressed the need to spot light on such issues and make discussions available to public; which represents the spirit of revolution and the core purpose of it. The revolution is meant to ask for freedom and dignity, put an end to domination, dictatorship and corruption, maintain Syria’s independence and respect its sovereignty, and keep it away from affiliation to any country or political pole.

The theater’s organizers are seeking to mainstream this experience and spread it out through a floating platform over the neighborhoods, and perhaps the rest of province’s cities. They will also try to improve their performance, promote the social awareness and optimize the way they express freedom which has always been the aspiration.