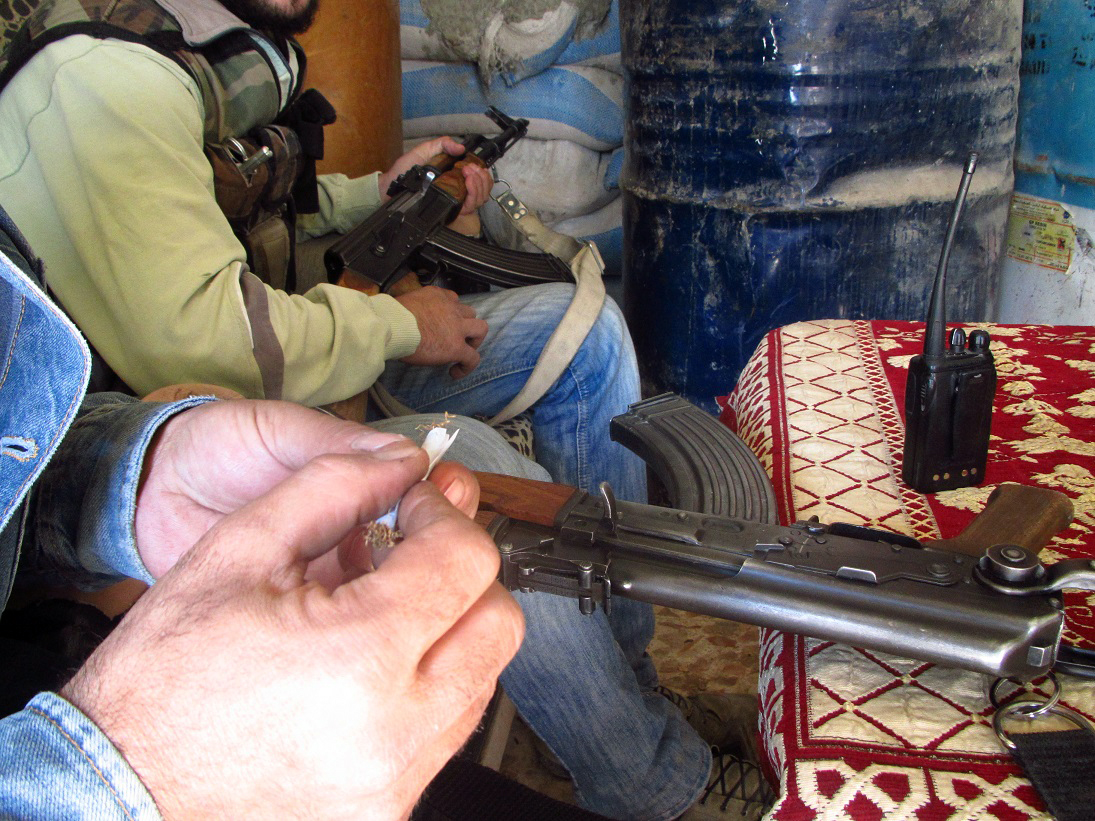 Smoking … Marginalized Suffering in the Heart of the Besieged Darayya

Smoking … Marginalized Suffering in the Heart of the Besieged Darayya

While local and international media have reported the imposition of decisions to ban smoking or criminalize its sale or consumption by civil and military legal commissions in the “liberated” northern regions of Syria, and apart from tackling the “bad” habit from a health, social and religious viewpoint, smokers from besieged cities (civilians and military) experience a hidden suffering because they are deprived of this product, in addition to other items like foodstuffs and supplies, due to the imposed siege which exceeded a year in some areas.

Darayya is one of those areas where smokers face the problem of deprivation of the substance that improves their mood and calms their nerves at times of pressure, as they say, without real concern or interest in their need.  Their consumption increased markedly with the start of the revolution and the accompanying tension, which in itself steadily increased with the progress of war that the country has sunk into and the accompanying daily pressures as well as the great loss of lives and property.

The need for tobacco has forced the city’s smokers, especially fighters, to pay very high amounts of money for a few cigarettes, which may not have been enough to the smoker for more than a few days. The price of a pack of cigarettes “Alhamraa” or the cigarette brand “Elegance” rose to 7,700 SP, said Abu Dujana, the former owner of the city bakery. He explained that the price has progressed to this level through several stages that the city has gone through during the current campaign. It rose at the beginning to 80 Pounds, then to 300 and disappeared for a period of time to be available later on at very high prices, causing him to reduce his consumption of tobacco from one pack and a half a day before the siege to only 5 cigarettes. He obtains them as a gift or buys them in piecemeal purchases for 500 pounds per cigarette, noting that the price of one pack of cigarettes outside the city does not exceed 150 SP.

Abu Shafiq, one of the tobacco sellers in the city of Darayya, says that he gets tobacco from the neighbouring city of  Moadamiyeh at a price of 60 thousand SP in one cruise to sell it at retail at the price of 7 thousand SP per box. He earns a profit of 10 thousand SP in one Cruise, which is the equivalent to the price of one box, considering that this trade provides a service to smokers in the city. Abu Shafiq renounces the behavior of some people who exchange tobacco for food supplies and believes that the government should punish those who do so.

Abu Shafiq says that tobacco is provided to Moadamiyeh by agreeing with some suppliers to put tobacco packages on Al-Arbaeen Street, which is adjacent to the city so that traders will take them and sell or exchange them inside the two besieged cities (Darayya and  Moadamiyeh). While some people in Darayya also secure it through secret roads that are not usually disclosed, others sell stocks that have been stored since before the blockade.

What is remarkable about this trade, however, is that part of tobacco comes directly from the fighting fronts across the eastern neighborhood of Al-Sham  Moadamiyeh, which is pro-regime and fully controlled by its forces. This has been confirmed by the majority of those whom we interviewed. Actually, money is thrown from behind the walls or houses adjacent to the fighting lines, in return for the delivery of packages of tobacco to the other side, after coordination between the parties through direct contact with cell phones in circumstances that we could not have access to.

Tobacco versus Food, Fuel, and Services

Those who do not have money to buy cigarettes have been forced to exchange it for the foodstuffs they have at home, including rice, burghul, and fuel, said Abu Saleh, a service worker. Each 15 kilos of rice or one gas cylinder can be exchanged for a single pack of cigarettes. He mentioned that a smoker once has exchanged one barrel of fuel with a pack of Mu’assel. Other smokers are forced to provide some services for some cigarettes provided by the employer, in order to motivate them to perform well. Some fighters secure several cigarettes a day through the leaders of their groups in the Free Army, says Mohammed, a fighter on one of the city’s fronts.

Abu Dujana says that some smokers invented untested tobacco alternatives. They used tea and mint and wrapped it like cigarettes. Others tried to cook the Mu‘assel (a syrupy tobacco mix containing molasses and vegetable glycerol which is smoked in a hookah) using some of the available ingredients, but no one could smoke it because of the health problems it caused.

Dr. Hossam, head of the field hospital in the city, confirmed that the hospital hosted many cases of respiratory tract and Bronchial infections due to the smokers’ use of tobacco alternatives. The doctor denounced the deeds of some smokers who do so in a time when the field hospital suffers from lack of medicaments to treat those who suffer from these infections.

Many of those we met hold the city’s local council responsible for the aggravation of this phenomenon, which is a double responsibility, since it is should be responsible for providing cigarettes to combatants and civilians on the one hand, and for holding those who exploit the smokers’ needs, through trading, bartering and extortion, accountable on the other hand. Abu Saleh believes that the council should provide cigarettes to the combatants the same way it provides them with food, and should also hold the cigarettes’ traffickers accountable.

The local council is responsible for the aggravation of this phenomenon because it has the greatest power in Darya, and thus it should be the authority which is responsible for panellizing the violators and securing the needs of the combatants who smoke. It should block the way of the commercialization of this trade and the subsequent exploitation and extortion of smokers, says Abu Wahid, who works in the city’s services yard.

However, Abu Ammar, the director of the city’s relief office, said that their priority was to secure basic foodstuffs and that the office would not mind adding the provision of cigarettes in their services as long as they are available.

From his part, Professor Alaa, head of the police station of the city’s local council, said that those who carry out this trade are “those who have weak personalities from the Free Army and civilians.” What pushed them to do so was the suffocating siege that has been imposed on the city a year ago. Alaa also confirmed that the police will hold accountable anyone found to be “involved in this blameworthy trade,” but the bad humanitarian situation of many smokers who buy cigarettes instead of food prevents the police from holding them accountable. Therefore, it releases them and sometimes a part of the police station’s food is given to the poor smokers.

Alaa says that cigarettes were brought into the city in previous stages by smuggling them from different roads or from the eastern neighborhood of Moadamiyeh. Some of the Free Army or civilian combatants would sell them to smokers at high prices or exchange them for rice, burghur or flour, as it happened in the recent months, “to a point that it became a public phenomenon” in both cities.

The head of the police office holds all of those who live in the city responsible for the popularity of this phenomenon. He considers that the presence of more than one team working on the ground and who are not administratively affiliated to the local council or to the Martyrs of Islam Brigade makes it difficult to the police to hold them accountable. For this reason, the police station contacts officials in other battalions to hold the wrong doers accountable and to take the appropriate measures against them. However, a number of activists in the city accuse the station of complicity with the culprits and acquiescence to favouritism under the pressure of the leaders of some fighting battalions. Cigarettes trafficker Abu Shafiq was arrested a week ago for bringing in cigarettes from the eastern neighborhood of Moadamiyeh city and then he was released the following day. In addition, some brigades of the Martyrs of Islam Brigade and Sa`d ibn Abi Waqqas Brigade have set up a patrol and they raided and arrested a number of cigarettes dealers who sell them at high prices and exchange them for food. The next day they were smuggled out of the prison in mysterious circumstances, and after a few days they returned to their trade.

It is true that the lack of cigarettes in the besieged city and their high prices forced many smokers to either quit smoking or reduce the cigarettes consumption. But from another side, cigarettes pushed some who have “weak personalities” to try to get it in ways that are not effective, which sometimes reached the level of stealing money and food supplies to pay for a pack of cigarettes or a few cigarettes, or to exchange them. This increased the lack of their sense of responsibility in light of the siege, which puts further burdens on those who are responsible for the revolutionary work inside of the city and those who are entrusted with securing the besieged people’s needs and finding solutions to their problems. It is a real test for their aptitude to be an alternative authority which would be worthy enough to manage the city’s matters during the post-regime phase.