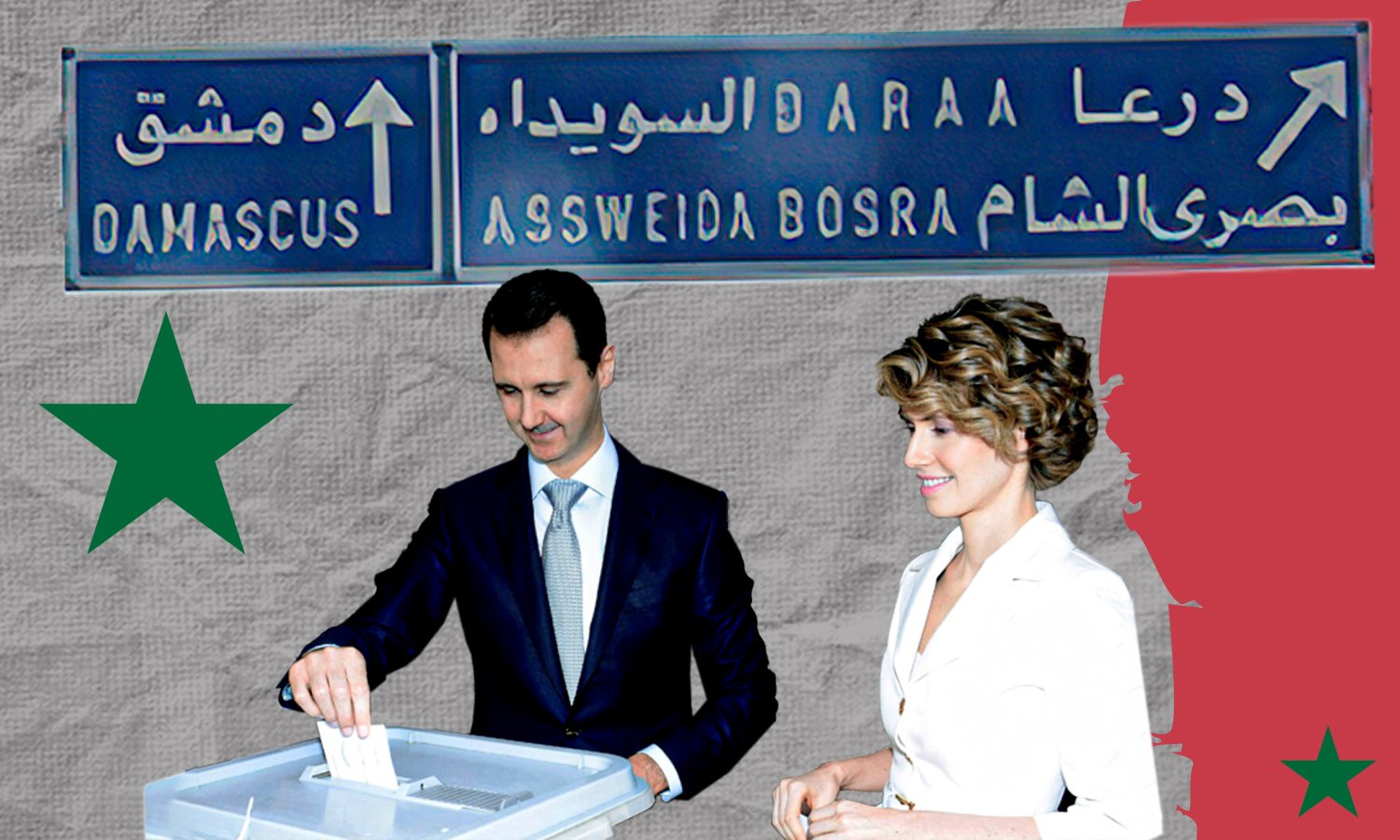 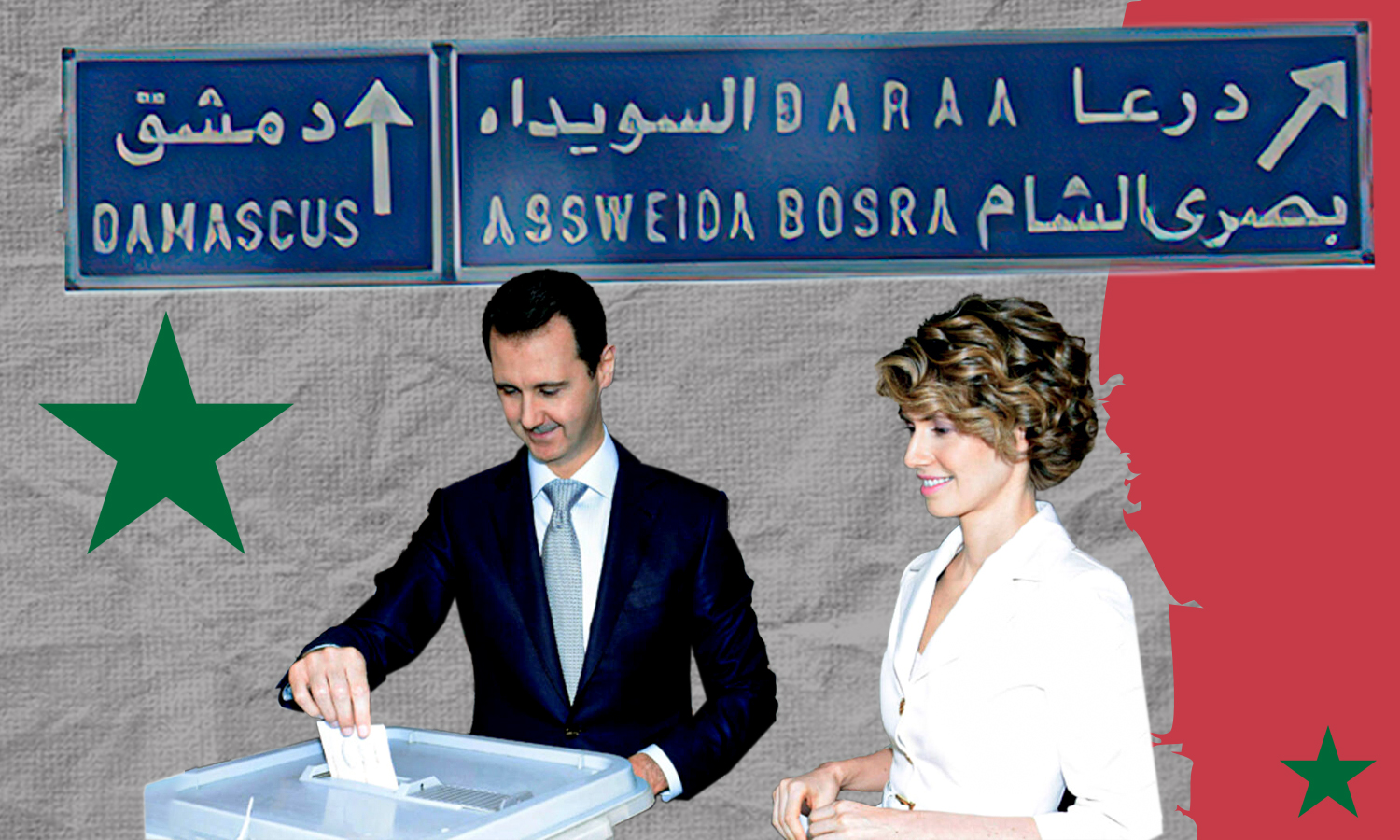 Less than two months before Syria’s presidential elections, scheduled to be held in April, the Syrian regime has accelerated a number of measures to calm tensions prevailing in the southern part of Syria, including As-Suwayda and Daraa.

This raises several questions about the method the Syrian regime adopts when governing the two regions of southern Syria, as well as whether the Syrian regime is at all concerned with improving voters’ deteriorating living conditions, where 90 percent of voters live below the poverty line.

This also raises questions about the strategies used by the head of the Syrian regime, Bashar al-Assad, to present himself in front of his supporters for a new term.

The Syrian regime is doing its utmost to impose control over southern Syria prior to the presidential elections, whether in Daraa or As-Suwayda. Yet, there is considerable variation in the way it deals with the two governorates, political and military researcher at the Jusoor Center for Studies, Abdul Wahab Asi told Enab Baladi.

Asi said that the Syrian regime embraces political, security, humanitarian, and military means in imposing settlement agreements on the cities of the western countryside of Daraa, as in the town of Tafas recently.

By contrast, for the most part, the Syrian regime does not use security and military means in the governorate of As-Suwayda.

On 7 February, through its security branches, the Syrian regime began to “settle” the situation of wanted people in As-Suwayda.

The so-called settlement agreement provides for abolishing the penalties for those who fail to engage in compulsory and mandatory military service.

Besides, the punishments of military deserters and persons wanted for security reasons are abolished if they join the military service in the Syrian regime forces’ ranks.

These persons will have to perform military service in the southern Syrian regions of As-Suwayda, Daraa, or Quneitra, according to Suwayda 24 Facebook page.

Political and military researcher at the Jusoor Center for Studies Abdul Wahab Asi pointed out that the Syrian regime’s settlement process in As-Suwayda is an initiative more than an agreement because it is limited to an understanding with the senior Sheikh al-Aql, Ahmad al-Hajari. Meanwhile, several al-Aqel sheikhs remain neutral and refuse to adopt coercive measures to impose compulsory service on the governorate’s people.

An apology that calmed down people of As-Suwayda

Efforts were made to defuse the situation in the governorate of As-Suwayda. Some Syrian regime officials offered an apology to the spiritual leader. This took place after crowds and delegations flocked to al-Hijri’s house in Qanawat town in the countryside of As-Suwayda.

A statement was issued by the Druze community’s spiritual presidency, which turned the page on the dispute with the Syrian regime on 2 February.

The statement, which was published on the official Facebook page of the Spiritual Presidency, stated that “after the deep apology, which senior government officials made, we assure everyone that this offensive event has been sorted out in all its dimensions,” referring to the “insult” that Sheikh Hikmat al-Hijri was exposed to by Brig. Gen. Luay al-Ali.

A private source from the town of Qanawat, north of As-Suwayda and where the sheikh resides, spoke on condition of anonymity for security reasons with Enab Baladi.

He said that Brig. Gen. Luay al-Ali “insulted” the sheikh over a phone call made by al-Hijri on 25 January in order to ask about the fate of one of the detainees from the governorate.

An agreement that blocks the road to military action in Daraa

On 8 February, the Central Committee and the Syrian regime, in the presence of a Russian delegation, reached an agreement that helps quell tension and prevent further escalation in the west of the governorate. This agreement came after the Syrian regime brought reinforcements and crowds into the region.

According to the committee, the agreement stipulated that 4th Division forces be allowed to search southern farms in the city of Tafas in the presence of the region’s people to ensure that no violations are committed against civilians and their property.

The agreement also provided for the handover of 14 anti-aircraft weapons used in the disputes between the Zoubi and Kiwan clans, as well as the handover of government headquarters.

The Syrian regime forces have controlled the Daraa governorate since July 2018, after a settlement agreement sponsored by Russia. However, the governorate has been experiencing security tensions and repeated assassinations targeting soldiers, officers, and elements who were in the opposition and joined the regime forces, in addition to notables and political activists in the Central Committees and local councils.

From the Syrian regime to the international community: Our environment is safe

The Syrian regime now needs to ensure the restoration of sovereignty over all the areas it controls, especially those that signed settlement agreements. This includes the As-Suwayda governorate, which was able to ensure a position of strength, relatively independent from the local politics, according to Asi.

The Jusoor researcher explained that restoring sovereignty means the security branches and state agencies, and institutions’ ability to restore and protect the decision and dictate the terms of power and control in society before the elections. The Syrian regime is thus marketing itself to the international community as imposing a safe environment.

Abdul Wahab al-Asi said that the Syrian regime is working on depicting itself as indispensable to Syrians in its areas of control by filling the minimum requirements– such as pensions, incentives, and services– while emphasizing the consequences of the absence of state authority from other conflict areas, which would cause great concerns and fears of any change in the governance model or the form of authority.

Routine steps away from the Syrians’ pain

Political analyst Hassan al-Nifi told Enab Baladi that “what the regime has done recently, regarding the settlement procedures with the evaders or deserters of military service in As-Suwayda, as well as the negotiations taking place with the people of Tafas, all fall within measures that have become routine prior to the launch of the new elections.”

“These meaningless stoppage measures cannot touch the essence of the Syrians’ sufferings, which are too big,” al-Nifi said.

Al-Nifi emphasized that the Syrians’ tragedy is not the subject of the Syrian regime’s serious concerns. The regime, in fact, only cares about preserving its power.”

Al-Nifi believes that the results of any elections conducted by the Syrian regime are already known, “but what he wants from these elections is to legitimize its usurpation of power.”

Researcher Abd al-Wahhab Asi agrees with the political analyst’s view, as “the Syrian regime pays no attention to mitigating and reducing the effects of economic sanctions on the living situation, nor to remedying the retreat of state institutions’ ability to protect and provide goods and services.”

He stressed that the Syrian regime is now keen to contain this deterioration through media discourse and emphasize the continuation of the state’s authority through bureaucracy and security policies.

Similar to the 2014 elections–which al-Assad won by 88.7 percent–the next elections are expected to occur amid the United Nations and the Syrian opposition’s boycott. It will be based on the 2012 constitution, mainly because the Syrian Constitutional Committee in Geneva has not reached any consensus yet.