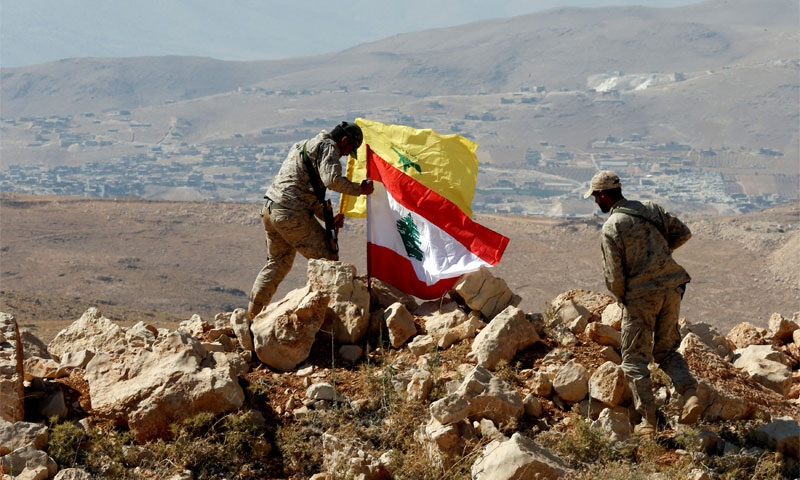 “You only own your houses; these lands are mine, and you may harvest your crops for one last time.”

This is what Hassan Duqo, a leader in the Lebanese “Hezbollah,” said to the people of some towns on the borderline between Syria and Lebanon, in the western Qalamoun region in northwestern Rif Dimashq province, such as the Syrian town of Assal al-Ward and the Lebanese Tfail village on the other side.

Duqo told the landowners in this area to harvest their crops for the last time before being seized, according to what a resident of Assal al-Ward town told Enab Baladi.

The lands appropriated by Duqo were leveled by bulldozers in front of the residents of Assal al-Ward town.

According to the young man, who spoke to Enab Baladi on the condition of anonymity for security reasons, these lands through their cherries and olives crops contributed to fulfilling their owners’ material needs for 100 years.

The young man could not visit his hometown’s neighborhoods due to his displacement in 2014 to Lebanon, where he remains until now.

Assal al-Ward is a town located on a hill, 1850 meters above the sea level, and 55 kilometers away from the Syrian capital, Damascus. The town is situated on the foothills of the Syrian western mountain range.

Assal al-Ward overlooks distant views and has cold weather, as snow covers its surrounding mountains for a long period of the year.

The town has a population of about 15,000 persons, according to the (Syrian Geographic Information Atlas).

What reasons lie behind land appropriation?

The twenty-nine-year-old young man cannot confirm whether the direct reason for Duqo’s takeover of some lands in Assal al-Ward was for the establishment of security bases for Hezbollah inside Syrian territory bordering Lebanon.

The young man continued saying that the entire Lebanese village of Tfail has become the property of Duqo, while he intends to appropriate some specific territories in Assal al-Ward “with the protection of Hezbollah and elements of the Syrian regime’s “Fourth Division.”

According to a report by “The Syria Report” news, data, and analysis website, the area to be appropriated extends on an area of 600 hectares (6,000,000 square meters) of land planted with cherry, peach, and apples, interwinding between the two countries.

According to the report, the majority of these lands are located on the Syrian side and are affiliated to the towns of Assal al-Ward and Rankous.

Although Tfail village is administratively affiliated to Baalbek – al-Harmal province west of Lebanon, it cannot be reached easily by road except through the Syrian side, while it is difficult to access from Lebanon’s side.

Tfail is a remote village located deep in the Anti-Lebanon Mountains, interwinding with Syrian territory. The village has an area of 52 square kilometers and is 57 kilometers distant from Damascus.

Hezbollah has been deployed since 2014 on both sides of the Syrian Lebanese borders in the western Qalamoun region. Besides Hezbollah, troops from the “Fourth Division” led by major general Maher al-Assad, the brother of Syrian regime’s president Bashar al-Assad are also deployed in the area on the Syrian side.

According to the young man, the Hezbollah commander Duqo, who holds the Lebanese and Syrian nationalities, claimed that he had bought the lands in Assal al-Ward town “to build factories and create jobs for the town’s youth.”

The young man added that each time Duqo intends to take over a land, his claims change, without any apparent reason or justification. Nevertheless, Duqo does not make any reference to Hezbollah’s connection to the matter when he addresses the residents.

Duqo claims that the Central Bank of Lebanon foreclosed the lands in the Tfail village and that he paid the bank 350 million USD for the mortgage and land purchases in Tfail, which the bank denied, according to The Syria Report.

However, the Assal al-Ward and Tfail residents believe that Duqo is “deceiving people to hide the truth of the land appropriation,” according to the young man. 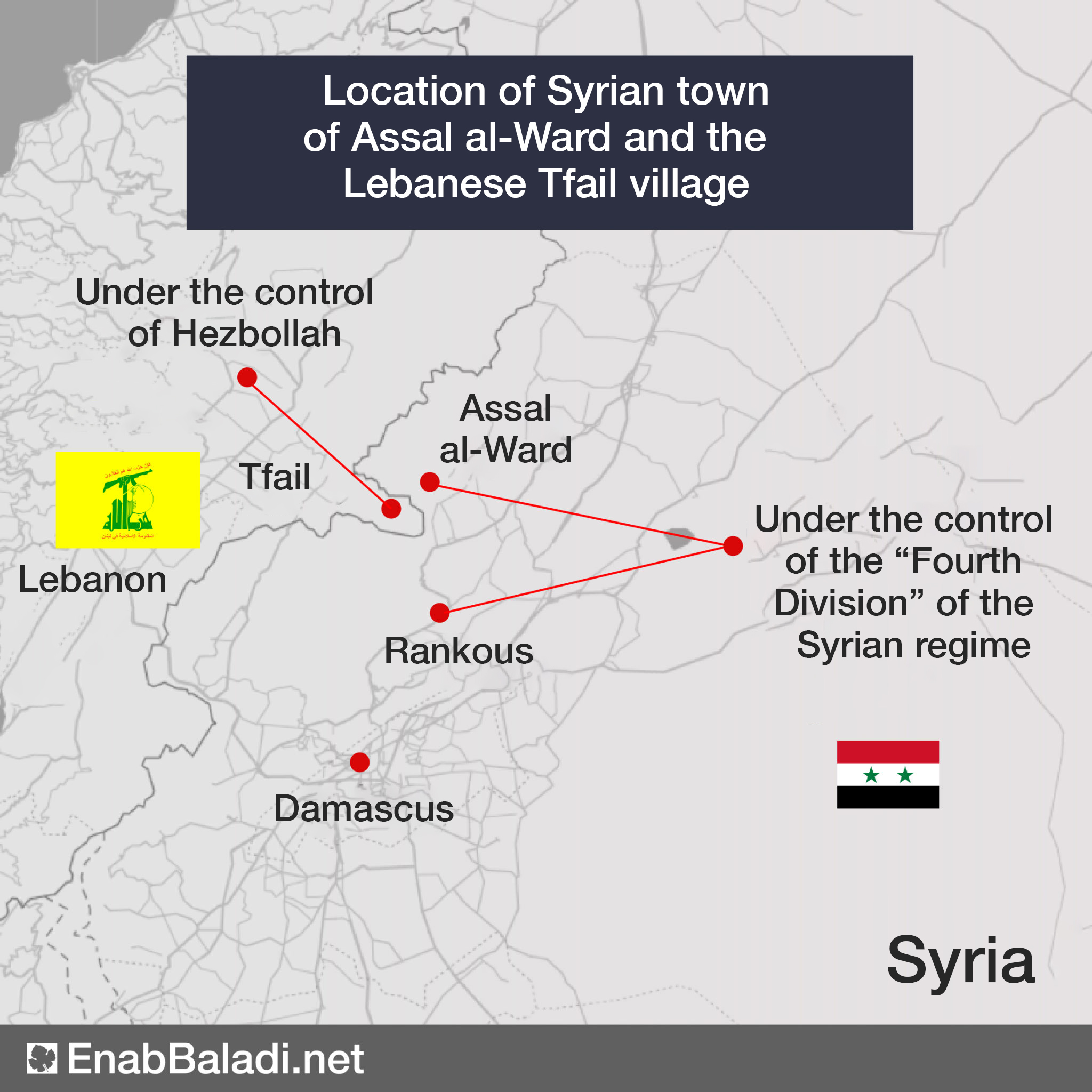 Demands to solve the problem

A few weeks ago, the residents’ position on the issue evolved to armed clashes between the Khalouf family from the Assal al-Ward town and Hassan Duqo, to claim their lands, according to the young man.

Nevertheless, the clashes did not lead to any solutions between the two sides.

The residents’ demands to resolve the issue of land appropriation and recover their properties of farmlands reached out to social media.

Through “Facebook“ posts, people in the town of Assal al-Ward have repeatedly called upon the town’s youth to stand up against the tragedy that is happening with the consent of the “Fourth Division” forces, to seize “more than 50,000 dunums (50,000,000 square meters) of farmlands within the Syrian border, to work on the land leveling and tree uprooting project.”

Among the pretexts that Duqo relies on when appropriating lands is that they are “state property, and there are no legal documents proving these people’s ownership to the lands,” according to the young man.

Under the 1958 Syrian Agrarian Reform Law No. 161, state agricultural property may not be expropriated, and no agricultural land may be disposed of except in the case of Syrian nationals.

Article 19 of the same law allows the formation of a judicial commission specialized in legal issues and disputes relating to ownership of agricultural land, determination of ownership, distribution of seized lands, and the investigation of real estate statements.

These real estate committees also deal with disputes over public property invested in agriculture or that can be invested, or state agricultural property, whether registered or not.

The law set a maximum limit on individual agricultural ownership and granted the government the right to seize the excess space over the allowed limit in return for a small compensation calculated on the basis of ten times the average land rent for an agricultural cycle of not more than three years. This runs counter to the 2012 Syrian Constitution, which stipulates in article “15” that private property is expropriated only in exchange for fair compensation.

According to the young man’s account of the Assal al-Ward people’s suffering, land appropriation still exists to date, despite the residents’ complaints to officials in the area’s municipality.