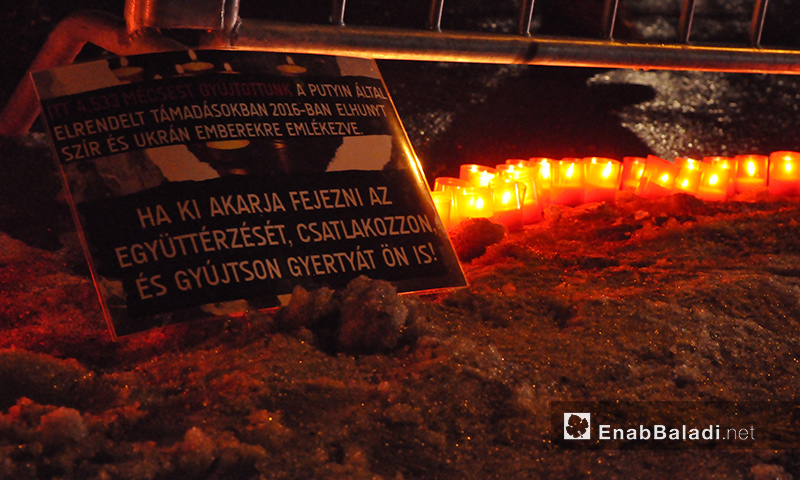 A A A
Enab Baladi – Gábor Billay

2nd of february, Russian president Vladimir Putin had visited it’s strongest ally in the European Union; Hungary. The visit had a strong meaning, because since the start of the Ukrainian conflict Vladimir Putin did not visit any EU member states, beside Hungary, where it was his second official visit in the last three years. While the tensions were increasing between the NATO and Russia, the hungarian government due to its EU and NATO membership seems to take the side of Moscow,But not everybody is satisfied with this alliance in Hungary.

Márton Gulyás, a well known oppositional Political activist had organized an event due the presidential visit to light up 4533 candles around the Rssian Embassy of Budapest. For the memory of those innocent  civilians who have lost their lives in the attacks ordered by Vladimir Putin in 2016 in both Ukraine and Syria.

Gulyás was not the only one to show his negative feelings about the new relations between Russia and Hungary. An oppositional party, called Eggyüt also protested close to the Hungarian parliament to show they are not pleased to see a war criminal in their country.

Hungary is a country that was invaded by the Soviet Red Rrmy for 46 years, so most of the people are not happy at all for the newly recreated friendship by their former invaders.

But for a small group, the visit of Vladimir Putin means nothing but the visit of a dictator who is responsible for life of thousands of innocent lives in Syria and Ukraine.

Gulyás had one message to all those in Syria and Ukraine. It’s only our government who is not able to recognise that they are dealing with a war criminal, but there are a lot of people in Hungary who just can not leave it without a word that the Russaian Army is taking thousands of innocent lives in both Ukraine and Syria.